O&M opinions and insights for the offshore wind industry The vast majority of offshore wind turbines stand on monopile foundations below the sea’s surface, and these foundations demand significant maintenance. But those of us who work with this area often feel the maintenance task isn’t really given enough attention – right from early planning phases through to the operational phase.

Sub-sea inspection teams and their advanced equipment focus on examining the effects of sub-sea forces such as tidal currents and alerting wind farm owners and operators to necessary measures to preserve their investments. Typically, an ROV or a team of divers is used to take a look at what’s happening underwater. Of particular interest is the state of the cathodic protection, which is a technique used to control the corrosion of a metal surface by making it the cathode of an electrochemical cell. The inspection team also examines the J-tube from which the turbine’s power cable emerges, checking to see whether the cable is lying securely on the seabed or whether it has repositioned itself perhaps a metre or two above the seabed, in which case the team need to decide how to bring it back into the correct position.

Scour protection is another issue. This pile of large rocks or interlocking prefabricated concrete blocks encircles the foundation on the seabed. It’s designed to reduce scour – the erosion of sediment around an underwater structure due to increased sediment transportation as a result of, for example, flow contraction or increase in speed, vortex development or increases in turbulence. The culprits are waves and currents (including directional changes in these), and the combination of the two.

Perhaps the biggest challenge is that scour damage is a moving target. In the UK, where currents are heavy, the seabed may be -4 metres at one inspection point then, just 8 months later it may be at -8 metres. So you need to inspect it regularly to see what is happening and set expectations for maintenance investments.

When it comes to inspection approach, there’s a change in the wind. For many projects today, and certainly going forward, the inspection tool of choice is the ROV. An ROV can also work at close to double the speed of divers, enabling more foundations to be checked during favorable weather windows. 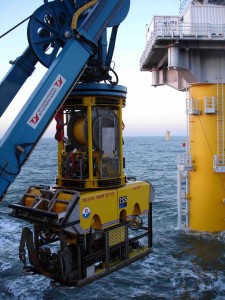 ROVs are also the safe choice from a people perspective. That’s because every time you put a diver in the water there’s a level of risk. And anyone would agree it’s far better to lose an ROV than a diver! ROVs can also perform a lot more inspection work during a day than a diver who can move at perhaps 1 knot, whereas an ROV can work at 2-2.5 knots, enabling it to cover twice the number of monopiles in the same time.

An ROV also overcomes the working time limitations of divers who periodically need to return to the surface. This makes, for example, filming long video sequences of scour protection difficult or impossible. And the more divers put into the team to enable working in shifts, the higher the costs and – certainly not least – the greater the safety risks. In part, ROV costs are somewhat lower as these vehicles demand less of a transport vessel than a team with multiple divers who not only need transport capability, but also accommodation at sea. And the complexities of recruiting or coordinating multiple divers is an less than desirable element in virtually any underwater project.

A word of advice

Here’s some advice born of experience for wind farm owners or operators when it comes to selecting an ROV contractor to carry out sub-sea inspections: It’s very important to find out whether the contractor owns its own ROVs or whether they charter the equipment every time. In a charter arrangement, you usually can’t get the same pilot every time, which doesn’t provide as reliable a result. Wherever possible, you really want the same ROV and pilot to do the job every time.

Whether it’s corrosion on the monopile, the state of the scour protection, the positioning of the cable as it leaves the J-tube, or simply organic growth on the tower, being ahead of the play and accurately aware of the state of underwater structures is becoming more and more important as wind farms start getting older.